Every Day is Arbor Day through the Urban Forest Initiative

The roots of the first Arbor Day are seeded in community engagement and a love for trees. Arbor Day dates back to the early 1870s when early pioneers began to settle in Nebraska City. The lack of trees in Nebraska was felt deeply by the settlers who came from the forested east coast. When Julius Sterling Morton moved to the state with his wife in 1854, the couple purchased 160 acres of land and planted trees and shrubs on what was primarily a flat stretch of plains. Morton became the editor of Nebraska’s first state newspaper, as well as Nebraska’s territorial Secretary of State from 1858 to 1861, which provided a great platform to spread his enthusiasm for trees.

In 1872 the Nebraska State Board of Agriculture adopted Morton’s resolution to create Arbor Day, a day set aside to plant trees. Prizes were offered to counties and individuals for planting (properly) the largest number of trees on that day. It was estimated that more than one million trees were planted in Nebraska on the first Arbor Day. Today, all 50 states celebrate this holiday, although the dates may vary to match each local climate’s best time to plant trees.

Each Arbor Day, we acknowledge the importance of trees within our communities. But here at the Downtown Denver Partnership, we think every day should be Arbor Day! Trees provide our city so many crucial benefits – filtering out harmful air pollution, reducing stress for our downtown workers, providing shade for those who frequent our shops, capturing carbon to combat global climate change, and more.

The Urban Forest Initiative is cultivating the culture around the importance of trees, building our urban canopy by improving planting area infrastructure, and maintaining our forest. Join us in being stewards of our trees. Let’s show them the same care and attention that we do on Arbor Day by protecting them from harmful insects and diseases, giving them the water they need, and most importantly, providing them with the space to spread their roots.

We invite you to join us at The Outer Space @ 16th & Welton this Arbor Day, April 30th, to learn about what we’re doing to create a greener Downtown Denver. We’ll also be giving a free ‘thank you’ beer to anyone that donates to the Urban Forest Initiative between now and April 30th. 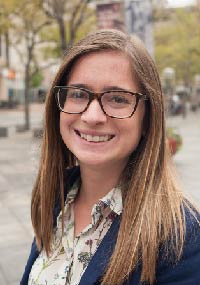 We hit the streets to find out what the community knows about affordable housing. Downtown Denver Leadership Program | 15-Min City