Lessons from one of the world’s most bicycle-friendly cities

By Piep van Heuven and Jack Todd of Bicycle Colorado 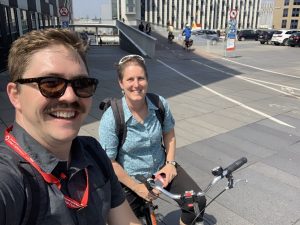 Denver Urban Exploration is a yearly opportunity for civic, community and business leaders from the city to take a look at what other cities are doing well—and what they aren’t—and see what can be applied in Denver. One thing that Copenhagen is doing as well as (or better than) anyone? Being a bike-friendly city. That’s why the Downtown Denver Partnership provided every conference attendee with a free bike rental for the duration of the conference.

Before providing a run through of the sessions Bicycle Colorado participated in, here are a few facts about bicycling in Copenhagen:

While there were several tracks to participate in on Denver Urban Exploration—including tracks focused on the local economy, architecture or affordable housing—we spent our time focused on mobility, which tied in to everything else discussed at the conference as well. We spent the majority of our time in the city riding bikes, exploring and experiencing the city’s infrastructure at all times of day and discussing what Denver can adopt here.

Lessons from One of the World’s Most Bicycle-Friendly Cities was originally published on BicycleColorado.org. Continue reading Piep and Jack’s adventures and lessons learned in Copenhagen here.