Spicing up the 16th Street Mall: Asada Rico Dishes Up Tasty Food with a Smile 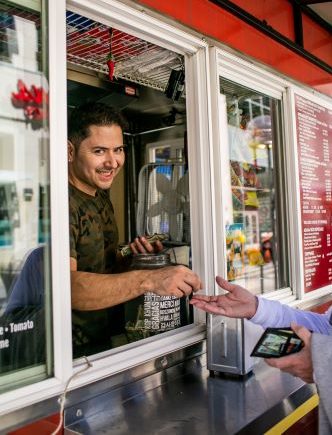 It’s 2:45 in the afternoon, and a steady stream of hungry people are hustling to get a last-minute burrito order in before Asada Rico on Denver’s 16th Street Mall closes at 3 p.m.

The kiosk’s owner, Manuel Peña, chats with his customers as the music coming from his kiosk prompts impromptu dancing. He dishes out fresh, made-to-order tortillas wrapped around a mix of crisp lettuce, tomatoes, chorizo, and beans.

“I run 1.4 miles in the morning and come here almost every day for a breakfast burrito with bacon and everything,” customer Kenneth Wheeler says. “It’s delicious!”

The Denver native has dreamed about selling his burritos, which are made from his mother’s recipe, since he was eight years old. When Peña heard about the BID’s vending program, he jumped at the chance to open a kiosk featuring his mother’s creations.

Peña has earned numerous accolades, including “Best Burrito” from both The Denver Post and Westword and “Most Delicious Burrito on 16th Street” from on16th.com. 5280 Magazine listed Asada Rico as a reason to love Denver “because you can find killer Mexican food in really weird places.”

Since 2009, Peña has been participating in the BID’s Vending Program.

“I wouldn’t be here if it weren’t for the BID,” Peña says with a smile. “They’re awesome.”

Asada Rico is just one of the many BID Vending Program participants. Some remain busy and successful as a kiosk, and others see the program as a jumping off point as they look to move on to a brick and mortar restaurant. Either way, we are happy our foodie-friends are bringing a variety of flavors and experiences to the heart of Downtown Denver.

This story was originally published in the 2018 BID Annual Report.