“This solution to transportation and mobility funding is imperative to the economic health of our state and the future of our residents,” said Tami Door, President and CEO of the Downtown Denver Partnership, “These funds will support projects and improvements that will strengthen mobility providing access to housing and jobs, increasing the quality of life for all Coloradans.”

The statewide coalition Let’s Go Colorado today submitted nearly 200,000 petition signatures on behalf of a comprehensive, bipartisan transportation funding solution would dedicate an additional .62 percent of the state’s sales tax to roads, bridges and other local transportation needs across Colorado.

The measure, which gathered an estimated 198,261 signatures, was formally proposed by former Centennial Mayor and Metro Mayors’ Chair Cathy Noon, a Republican, and Summit County Commissioner Dan Gibbs, a Democrat.

Colorado now spends half per motorist on transportation than 25 years ago, while the state’s population has risen by more than 2 million in the same period.  The state’s gas tax, unchanged since 1991, is of decreasing value due to the increase in fuel efficient vehicles, hybrids, and electric vehicles.

By dedicating approximately 6 cents on a $10 purchase to transportation, the proposed initiative would generate $767 million in its first year which will allow for $6 billion in bond revenue – taking a huge chunk out of the $9 billion in unfunded projects identified by CDOT.

The petition signatures will be reviewed by the Secretary of State’s office and then the measure will be certified for the November ballot. 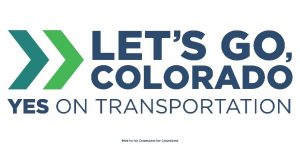 The Downtown Denver Partnership is part of a bipartisan statewide coalition in support of a 0.62 percent sales tax increase to invest in Colorado’s transportation system on the November ballot.