Looking for the best fusion street tacos on the 16th Street Mall? Look no further! With 8 diverse and delicious flavors to choose from, the Taco Connection kiosk, between California and Stout Street, is the perfect spot for your cravings. 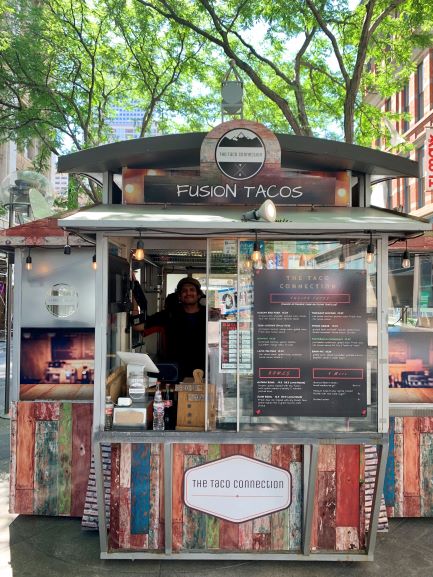 Amish, who owns and operates the kiosk, has been on the Mall for about a year and a half. Before that, he had an empanada pushcart called Del Sur, inspired by his travels to Argentina. Once he decided to move forward with a truck, Amish realized that he wanted a product that better displays the fresh and delicious ingredients he serves to his customers… Switching from empanadas to tacos became an obvious solution. He started with 3 types of tacos and has expanded his options significantly since then. Fan favorites are the Korean BBQ and Jerk Chicken tacos. Amish has flavors for every palate, including the particularly fresh hummus, cucumbers, and quinoa taco.

When asked the most unique thing about his truck, Amish focused on the flavor that he brings to his tacos by not focusing on the typical Mexican, Hispanic, or Latin style tacos. He tries to make each taco as authentic as he can and produces the flavor all on his own, like his tandoori spice mix or Korean sauce.

What really sets Amish apart is the amount of care and energy he puts into his work.

“It’s just about the time and effort that goes into making sure each of the flavors stay true to origin.”

Amish has plans to open a brick and mortar, which is in the building process, and is excited to add 6 more tacos to the menu. Be sure to stop by Amish’s kiosk and try one of his tasty tacos before it’s too late!